Yes, not only is chiropractic care during pregnancy safe, it is highly beneficial! Dr. Thomas is Webster Certified and completed a fellowship with the International Chiropractic Pediatric Association in August of 2000. This allows him to care for pregnant mothers and infants in a more specialized manor. This natural, gentle approach is wonderful for pregnant women and because it is drug-less, it will not harm the baby. Safe, natural chiropractic care can help headache, backache, leg pain and sciatica, morning sickness, hemorrhoids, constipation, swelling, carpal tunnel syndrome, toxemia, and much more. 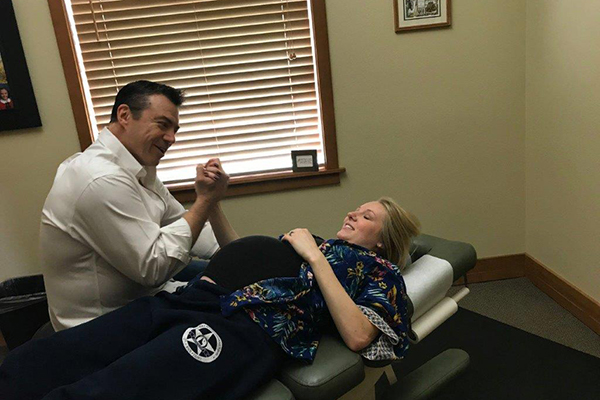 What are the benefits?

Why is chiropractic beneficial during pregnancy?

Chiropractic care is an important and essential consideration for the pregnant mother. Your systems and organs are now supporting two lives instead of one and optimal function is critical for baby’s healthy development. The mother’s spine and pelvis will undergo many changes and adaptations to accommodate for this new life growing inside of her. Because of these changes, the risk of interference to the nervous system is greatly increased. The nervous system controls all of the function of the body, including those having to do with the growth and development of the baby and those processes involved in labor. Specific chiropractic adjustments throughout pregnancy are vital to ensure that the nervous system is functioning properly thus providing the greatest potential for a healthy pregnancy and birth.

Chiropractic care throughout pregnancy also helps establish a properly functioning, well balanced pelvis. A lifetime of stress and/or trauma to a mother’s spine and pelvis can compromise the pelvic opening resulting in a less than optimal passage for the baby. William’s Obstetrics Text states that, “Any contraction of the pelvic diameters that diminish the capacity of the pelvis can create dystocia (difficulty) during labor.” They further state that the diameter of a woman’s pelvis is decreased when the sacrum is displaced. Chiropractors define this displacement as a subluxation. Chiropractic adjustments to the pelvis helps ensure that subluxations to the spine and pelvis do not exist therefore providing for the maximum amount of room for the baby to exit. Women who have been under chiropractic care during pregnancy report reduced labor times and less need for medication during labor.

A woman’s pelvis supports her growing uterus with specific ligaments that connect to the pelvic bones. When the pelvic bones are balanced, the uterus is able to enlarge symmetrically with the growing baby. If the pelvic bones are subluxated or out of balance, this causes a torquing of the uterus reducing the amount of room the baby has to develop. This is called intrauterine constraint. In some cases, this constraint restricts the baby’s position during pregnancy thus affecting the baby’s developing spine and cranium. This constraint also affects the baby’s ability to move into the right position for birth. Any position other than a head down occiput anterior position indicates the inhibiting effects of intrauterine constraint. These positions are what leads to long, painful labors and an increased need for medical intervention. Often C-sections are the end result and the mother and baby miss out on the many benefits of a natural vaginal birth.

Dr. Thomas uses a technique developed by the late Dr. Larry Webster to remove intrauterine constraint. It is called “Webster’s Breech Turning Technique” or more accurately, “Webster’s In-utero Constraint Technique” and is an adjusting protocol for turning babies who are breech or posterior. It is much safer than version techniques and we have had good results with it even into late pregnancy. Chiropractic care has been shown to help women in their ability to become pregnant, maintain pregnancy, control vomiting during pregnancy, deliver full term infants with ease, and produce healthier infants. These special adjustments normalize the functions of the pituitary, adrenal, ovarian, and placental systems, including the cranial sacral respiratory mechanisms. This shortens labor and lessens medication requirement. Postpartum depression is a rarity in patients under chiropractic care.